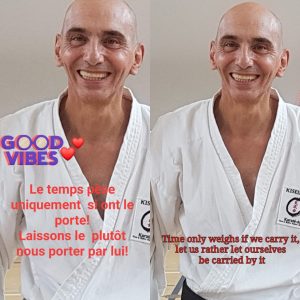 אודות
Yves Ayache was the pupil of Master Tetsuji Murakami during of numerous years. He is confide to Jean-Paul Maillet.

Karaté-Bushido:
Yves Ayache, you followed Master Murakami during about twenty years. What taught you Shotokai?

Yves Ayache: I began the karate with Master Murakami in 1969 and I knew only Shotokai. What immediately attracted me it is this notion of harmony. There is a technical side which appears On photos, as those whom we made together, but it is only a small part of the work.

K.B.: But how reach this result?

Y.A: a person who practises Shotokai has to manage to be flexible at any time doh its day. It has to be all the time flexible. As well to understand a person, it is necessary to listen to him, to accept him. It is as the bottle she has to be empty to be able to filL it. It is simple, II needs to be available in the sense or it is always necessary to be ready has to accept about of other one. You should not be "blocked" it is all our physical constraints which stand out. There is a lot of people which are very soups of certain parts of the body but there are always places where they are more stiff than others. Some are very strong for the wide split but has we ask them to coil the hand and to put her in the back they are not going to arrive there. Because they polarized on a place of their body, they did not soften the body, the purpose of Shotokai it is to be flexible and strong and to concentrated in a single point. It is necessary to be flexible and to have the maximum of concentrated strength one a single point. That's it Shotokai.

KB.: it is thus on this principle, that by means of
Master Murakami you established all your karate?

YA: it is necessary to understand that Shotokai is a part of the branch of the Karate Doh of Master Funakoshi. After his death it is the master who developed, we can even say created Shotokai, to leave the teaching of Master Funakoshi. That is Shotokan. the word, the wind of m
Master Funakoshi's artist's name which was "Shoto" and which means " the wave of pines " because in the region there were pines and when it walked in wood, he saw the Tops of the pines which made as waves which became confused in the sea and it pleased him a lot. "Caravanserai" means the house. Shotokai, it is the nickname of Master Funakoshi but we put "kai" at the end which means " the group ".

Instead of this soitt The " House doh Shoto " it is the " Group of Shoto ", thus the " Group of Master Funakoshi ". Master Egami thus developed Shotokai and Master Murakami, one of the first Japanese to come in Europe, came in France in 1957. When he arrived he practised Shotokan that is for us the hard method. Then at the end of a few years he returned in Japan where he met Master Egami, from this moment there, he completely abandoned the method of work last and it is true till the end of his life, he developed and taught Shotokai. II had understood that to block an attack it is to go against somebody and that it is only a question of strength because the defense can then be effective only if we are stronger than the aggressor. Us, what we are doing it is to go astray, the attack, to accompany him. The purpose it is not doh to block the attack most hardly possible but to use the strength, by arriving in the same moment as the attack. To divert her.

K.B.: It supposes a timing completed between the aggressor and the defender?

YA: the notion of time is very important because we manage to enter the attack of other one. We practise Irimi – what means " to cross by small door " in Japanese. The small door it is the moment when the partner decided to attack you, and the moment or his brain is going to give the order to the body, this milliéme of second allows us to go into this space. As the aggressor gave the order to make something for his body, he cannot react any more to this counter-attack. We can react only if we make feints, as in competition because then we do not give ourselves to 100%

YA: from her, we understand that this working shape it is as the fight of Samurais and she(it) excludes antagonize competition. It is necessary to know also of him MasterFunakoshi was against the competition. It is after his death that his followers developed the system of competition. While he taught there were fights but these fights were sometimes mortal. For them the fight state the way to know if they were effective in front of the real situation. It had nothing to do with the competition. Thus this form was protected but Shotokai, is the least known method, it is the competition which was the most developed, because the western spirit prefers The competition and the reward. Car. With my pupils there is not a competition. We are satisfied to Practise, the training is an enjoyment. The pupils have a practice freely, as, they feel him in their body. I kept the former system of the ranks, the white, the chestnut and the black because I wanted to delete this small competition between the pupils on the colors of belts: in life, in the nature there are no ranks. Some have ranks but they represent nothing. What matters in the Karate it is to last for a long time It is not a competition it is a member of the life. It is a louse ' it that I spoke about flexibility at the beginning of II needs to arrive at this flexibility of spirit and the body which allows to last for a very long time –
כתובת